Allen + Shariff provided MEP/FP engineering design services for the renovation of the Children’s TV and Radio Studio on the sixth floor of Children’s Hospital of Pittsburgh. This project was built from donations and a wall was dedicated for those who had donated. It was a very spherical project for the hospital because it was a creative zone where the kids can relax and just have fun. There are many different options for all the kids, such as a pottery studio, arts & crafts, music studio, theater for the kids to perform, and even a radio studio where the kids can host their own radio stream throughout the hospital. This way, everyone can be involved, even if they aren’t feeling well enough to get out of bed.

The electrical scope included design of lighting systems for the studio and art therapy areas. It also included the design of networked lighting control systems. The networked lighting control system for the studio and theater spaces included touch screen DMX controls. Point of use power design consists of tamper-resistant receptacles for the areas and coordination of power requirement for AV systems. An exhaust fan was added to provide smoke evacuation for the atrium adjacent to the studio. The low voltage system design included fire alarm, access control and telecommunications systems.

The mechanical scope was a complete upgrade to the VAV reheat system serving the project area. The project extended into the Atrium so a smoke evaluation system was added to serve the TV and Radio Studio addition within the atrium. The control sequence in the TV and Radio Studio used motorized dampers in the return ductwork to interlock operation with the smoke evaluation system. The TV and Radio Studio was built to satisfy sound standards which integrated ducts having sound lagging, sound attenuators, specialty wall penetrations, and sound barriers in the ceiling. The mechanical system included radiant panels feeding interior and exterior spaces. 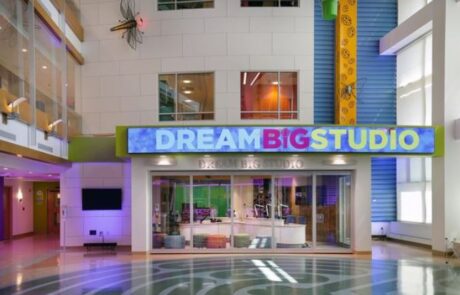